At home, Zeus' favorite planet is Earth. When he's roamin', it's Jupiter.

Boost Duration
Zeus is a

Zeus is a yellow snake with large white fangs, a pink forked tongue, and black pupils. He has long horns that stick out at a horizontal angle that are tipped pale yellow. He has a pale yellow scaly belly with white lightning patterns on his forehead, cheeks, and tail. His back has a large white glowing lightning bolt running all the way down his back. His tail is shaped like a three-pointed fire bolt that glows bright golden which releases a pulsating static lightning charge throughout his whole body. He has gold-yellow eyes with red shine. 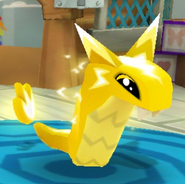 Zeus on the Pets Menu. 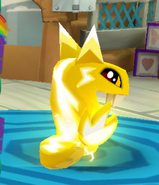 Zeus after being caught.