The Treasure Chest is an aspect of the game. There are two types of chests: the single-key and the triple-key. The single-key chest can be obtained in-game and can either use one Key or watch an ad to be opened. The triple-key uses three Keys to be opened but does not have to be physically won in-game. Each treasure chest rewards a prize, whether that be Emeralds, Coins, or Lures.

The triple-key treasure chest is slightly larger than the single-key chest. It is made of purple wood, with many golden borders around it, which can be seen around the sides, middle, and corners of the chest. Emeralds can be seen on the top and side of the triple-key, which are framed by golden borders. Three golden key locks can be seen on the lower front of the chest, each encrusted with two tiny emeralds. The chest has a handle on the lower end of its side, and is slightly arched higher than the single-key treasure chest. 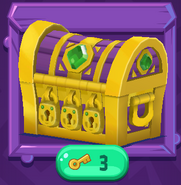 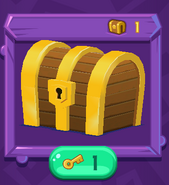 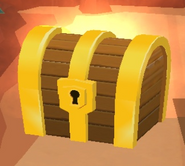 The single-key chest seen as a Collectible. 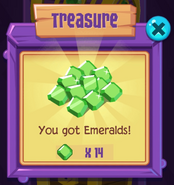 Winning emeralds from a triple-key chest. 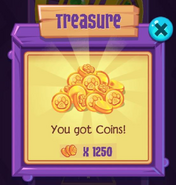 Winning coins from a triple-key chest. 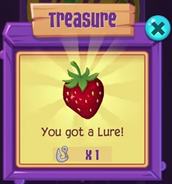 Winning a Strawberry Lure from a chest. 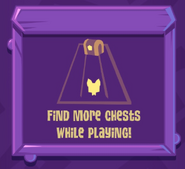 The screen that appears when there are no single-key chests from runs.
Add a photo to this gallery
Retrieved from "https://dashtag.fandom.com/wiki/Treasure_Chests?oldid=8817"
Community content is available under CC-BY-SA unless otherwise noted.