With Sparky, there's never any holding back! He runs on impulse!

Boost Duration
Sparky is a Common Puppy pet. He is the starter pet and the first pet you get in the game.

Sparky's fur is mainly a dull shade of red with a light gray face, underbelly and paws. He has a golden lightning pendant hanging from the gray collar around his neck. There's a yellow lightning bolt pattern on his forehead, along with two more yellow lightning bolts on the back of his head. His paws are rimmed with a darker shade of red, this darker shade of red also colors his ears and tail. He has blue eyes and large black pupils with a dark purple shine. He has a pink nose and tongue, of which the tongue is sticking out slightly. 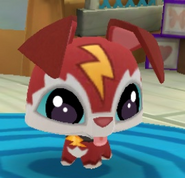 Sparky on the Pets Menu. 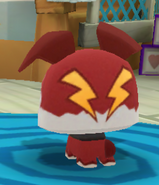 A photo of Misha chasing Summer, Sparky, and Turbo. 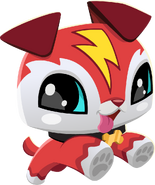 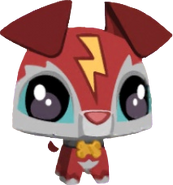 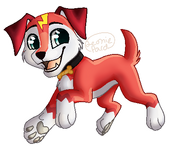