Sparkles has always thought Peggy was the evil twin.

Boost Duration
Sparkles is a

Pony. Sparkles is one of the pets added outside of the initial release, in Version 1.2.1 added along with the pets Ember, Peggy, and Quetzalcoatl.

Sparkles is a white female pony with a light pink muzzle and dark golden hooves. She has large white wings tipped with yellow and dark golden with spirals in the center. She has a bright yellow mane that is tipped with slightly darker yellow on the ends. She has inner light pink ears both of which are nicked. She has large blue eyes with long eyelashes. She gives off tiny white sparkles as her name implies. 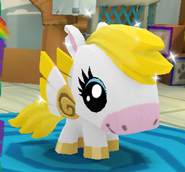 Sparkles on the Pets Menu. 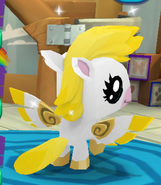 Sparkles, along with Peggy, Ember, and Quetzalcoatl announced in the Jamaa Journal in Animal Jam.
Community content is available under CC-BY-SA unless otherwise noted.
Advertisement