Because he is cunning and ambitious, Slithers is always slitherin'.

Slithers is a green snake with lighter shades of green on their belly. He has darker green flaps on the side of his head which makes it apparent that his species is a cobra. He has a light green dot on the top of his head outlined with lighter green diamond-shaped patterns on his back, which are outlined with darker green color. The patterns steadily grows smaller from head to tail. He has yellow eyes and a red forked tongue. 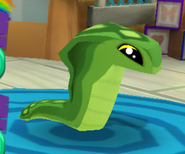 Slithers on the Pets Menu. 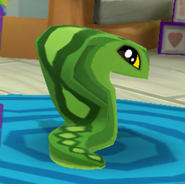