View source
watch 01:40
The Sandman Will Keep You Awake - The Loop
Do you like this video?
Play Sound

When you've got a mask like Quetzalcoatl's, making a grand entrance is all too easy.

Boost Duration
Quetzalcoatl is a

Snake pet. Quetzalcoatl is one of the pets added outside of the initial release, in Version 1.2.1 added along with the pets Peggy, Sparkles, and Ember.

Quetzalcoatl has a bright teal body with a dark orange underbelly that ends with a golden, yellow, and orange feathered tail on the end. His mask consists of bright yellow feathers which resemble flower petals, tipped light yellow, surrounding his mask that also runs down his back. He has two bright orange and yellow horns which are bent near the top. Quetzalcoatl has a yellow streak going down his mask that spreads out into dark spirals near his snout. He has yellow and orange spirals on his eyes and cheeks, which are connected to his orange mouth with his light yellow sharp teeth exposed, with two large fangs sticking out. He has dark orange eyes with bright orange shine and a dark orange forked tongue. 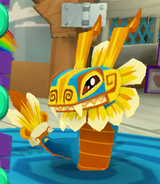 Quetzalcoatl on the Pets Menu.

Quetzalcoatl, along with Sparkles, Peggy, and Ember featured in the Jamaa Journal in Animal Jam.