Peggy has always thought Sparkles was the evil twin.

Boost Duration
Peggy is a

Pony pet. Peggy is one of the pets added outside of the initial release, in Version 1.2.1 added along with the pets Ember, Sparkles, and Quetzalcoatl. 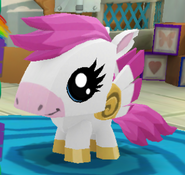 Peggy on the Pets Menu. 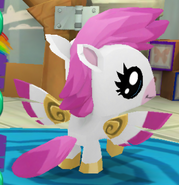 Peggy, along with Sparkles, Quetzalcoatl, and Ember announced in the Jamaa Journal in Animal Jam.
Community content is available under CC-BY-SA unless otherwise noted.
Advertisement