Misha is the main antagonist of the game and is shown to be the caretaker or owner of the runaway Pets. She chases the pet until the pet runs into an Obstacle, and when that happens, she lectures them. She can often be seen with a Stroller, and sometimes with an Outfit.

Misha is a large purple panda with green eyes, a creamy-white body, and pink paws. She has purple markings on her eyes, ears, arms, legs, and paws. Both of her arms have two light purple stripes running horizontally across them and she has light purple blush on her cheeks.

Misha chasing after Tiger on the screen that pops up once the app is opened.

Misha with her Umbrella Stroller.

Misha asleep with her Umbrella Stroller. 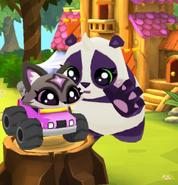 Misha attempting to catch Dusty located in the Monster Truck on the home screen.

Misha close to catching Checkers during a run.

Misha scolding Checkers after crashing into an Obstacle.
Community content is available under CC-BY-SA unless otherwise noted.
Advertisement