The Milk Carton lure is used to attract kittens. It can be purchased by spending coins or during a chance that can be found while running.

The Milk Carton looks exactly like what it says. It is a light blue and white milk carton with dark blue-grayish roof sides, stripes around its base outlined by white, and a dark-grayish cat face on the front with white eyes. At the top an arrow can be seen where you open up the carton as like all milk cartons. The five lures only show three milk cartons together. 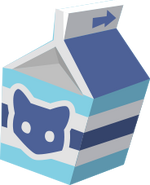 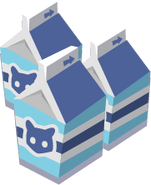 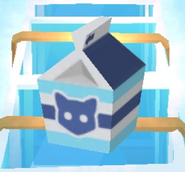 Sprite of the Milk lure collectable.
Add a photo to this gallery
Retrieved from "https://dashtag.fandom.com/wiki/Milk_Carton?oldid=7335"
Community content is available under CC-BY-SA unless otherwise noted.