Boost Duration
Midnight is a

Midnight is dark blue in color with a light blue face, muzzle, and part of her tail. She has white ear fluffs, tail tip, and a white muzzle with a purple nose. She has white spots all over her body, seemingly symbolizing stars on her wings, head armor, leg armor, and a white gem encrusted necklace. Large white stars will appear and disappear all around her body like sparkles. She has purple rimmed lighter purple with starry white pattern like-armor on her forehead, paws, and necklace which has a Yin & Yang pendant. She has two large dark purple wings with light purple tips. Her eyes are lilac purple in color and she has long eyelashes, in which she has very light blue eyeliner over her eyes. A star-like emblem similar to the Yin & Yang symbol sits on the top of her forehead. Above the tips of her light purple ears are two icy-blue stars that shoot off blue light. She creates purple smog around her paws.

Midnight on the Pets Menu.

Midnight in a Monster Truck with stiff wings. 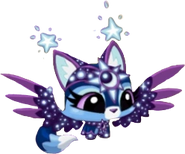