The unluckiest moment of Lucky's life? When she overslept for a nap.

Boost Duration
Lucky is a

Lucky is a tan-brown puppy with clover-green eyes with a midnight blue shine. She has droopy ears and a tuft of fur at the tip of her head along with a long droopy tail. She has a lighter brown face and underbelly. She wears a green top hat with a golden band around the top of its rim. A seemingly bright green four-leaf clover dangles from the edge of the hat. She wears a green collar with a golden pendant in the shape of a four leaf clover. 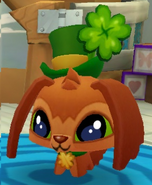 Lucky on the Pets Menu. 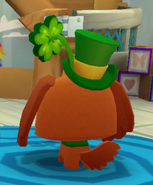 Lucky after being caught. 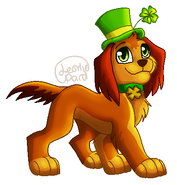 By Leoniepard
Community content is available under CC-BY-SA unless otherwise noted.
Advertisement