Kitsune is a master of disguise magic. Has he been here the whole time...?

X2 Duration
Kitsune is a

Fox pet. Kitsune was the first pet added outside of the initial release, in Version 1.1.9.

Kitsune is primarily a very dark purple color, almost maroon, with lighter purple and pink markings on his face, ears, claws, chest, and tails. The markings on his face resemble that of a masquerade mask. Kitsune has three tails to match the mythical creature on which he is based on. His eyes are a deep cyan color with dark turquoise shine. He has a hot pink flame burning and floating just above his head. 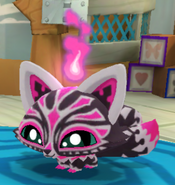 Kitsune on the Pets Menu. 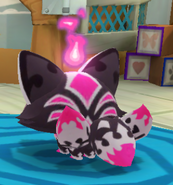 Kitsune after being caught. 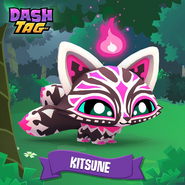 Kitsune announced in the Jamaa Journal in Animal Jam. 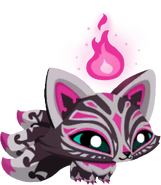