The Flute Lure is used to attract Snakes. It can be purchased by spending Emeralds or can sometimes be found as a Collectable in-game while running.

The Flute is a tannish-orange color, with darker brown coloring at the base of it along with the band on the end and top of the flute. It has three brown holes at the upper end and one large hole at the end of it where a sound comes out of. The top of the flute cannot be seen. The five lures for the flute show five flutes bundled tightly together. 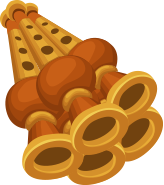 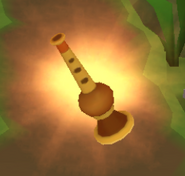 The Flute as seen as a Collectable in-game.
Add a photo to this gallery
Retrieved from "https://dashtag.fandom.com/wiki/Flute?oldid=6929"
Community content is available under CC-BY-SA unless otherwise noted.