Fancy Tron is the sleekest TURT-13 model to date!

Boost Duration
Fancytron is a

Fancytron's outfit appears to depict that of an upperclassmen/gentleman with seemingly sparkly "diamond colored" highlights in a light-blue to black color scheme; this is visible in his black top hat, shoes, and mustache. His mustache is black with a tinge of shiny blue. He appears to have wings that even appear to be attached to his shell as they are visible even when he slides his head back. His head appears to be shaped differently than that of most other Turtles as they have sharper edges with seemingly defined points. They have an overall sparkly and shine look to them, and which sparkles appear all over their body alike to Midnight. 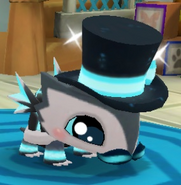 Fancytron on the Pets Menu. 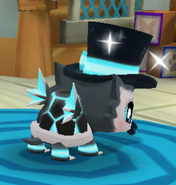