Whenever she gets coffee, baristas always write "Amber" on her cup.

Boost Duration
Ember is a

Puppy pet. Ember is one of the pets added outside of the initial release, in Version 1.2.1 added along with the pets Peggy, Sparkles, and Quetzalcoatl.

Ember is a white dog with backs spots around her body. She has black floppy ears, front paws, nose, tail, and spotted black right eye. She has red firefighter hat with a yellow fire symbol on the front, which matches her red collar with a golden bone pendant attached to it. She has large sky-blue eyes with dark blue shine. 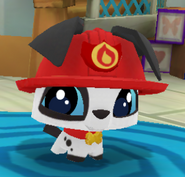 Ember on the Pets Menu. 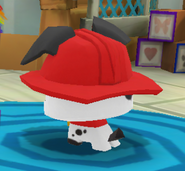 Ember, along with Peggy, Sparkles, and Quetzalcoatl announced in the Jamaa Journal in Animal Jam.
Community content is available under CC-BY-SA unless otherwise noted.
Advertisement