Drake wants to grow up to be a dragon. Or a pirate. A dragon pirate?

Boost Duration
Drake is a

Drake looks remarkably like a dragon, as that is what he is based off of. Drake is a reddish-orange color, with a brown face and brown wing membranes. He has two horns at the side of his head, along with dark reddish-orange horns doing down his forehead. He has a red shell that is rimmed white with tiny red wings. He has dark reddish-orange stubby legs with white toes and a stubby tail. He sports teeth sticking out of his mouth. Drake has magenta eyes with dark red shine, along with shiny pink blush on his cheeks. 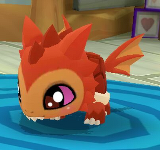 Drake on the Pets Menu.

Drake after being caught. 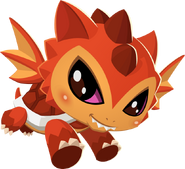