Dexter has a teal colored body with darker teal markings on his ears, tail, face, and paws. He has lighter teal markings around his face, muzzle, chest, tail, and hair tuft. The lighter teal markings on his face make an outline between the darker shade of teal and more average shade of teal. He wears safety goggles that have a gold rim around the lens and a red strap that wraps all the way around his head. His hair sticks up sharply at the top of his head, he also has his claws sticking out. He has a pink nose and pink inner ears, his eyes can't be seen due to the heavily tinted goggles. 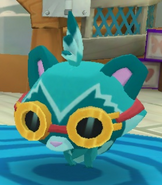 Dexter on the Pets Menu.