Copper can only think of clever retorts to trash-talk a full year after the event.

Copper is a bright brown-light fox with creamy markings around her eyes, mouth, and chest, paws, ear fluffs, and tail tip. She also has red markings right around her eyes, has red inner ears, and around her tail. She has slightly darker brown-light coloring around her muzzle, paws, and ears. She has spiky hair sticking up on her head. Copper's eyes are golden with dark orange and short eyelashes.

Copper on the Pets Menu. 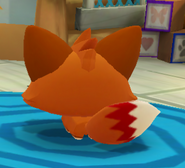 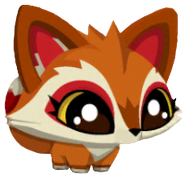