Colby loves cheese more than anyone. Well, maybe not more than his friend Jack.

Colby is mostly dark grey with stripes on his side and belly going down from red, orange, light orange, and yellow. His belly is actually rainbow but most of the yellow, green, blue, and cyan cannot be seen much in his certificate. His back consists of boxes, each a different color of the rainbow. He has a flickering red tongue and narrowed red eyes with dark red shine. He appears to be a cobra. 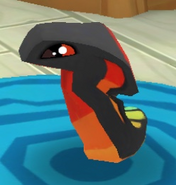 Colby on the Pets Menu. 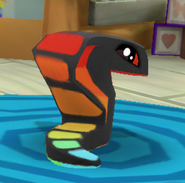 Colby's belly that can be seen when being caught by Misha.