For his birthday, Chip always wishes for the end of mass incarnation.

Boost Duration
Chip is a

Chip is a puppy pet with brown and dark gray fur. His muzzle, ears, and on the top of his tail are dark gray which is also a darker brown in color. He has a slightly lighter brown chest and dark pink ears, nose, and tongue which sticks out. He wears a dark red collar with a golden bone pendant along with a large dark blue police hat with a dark gray strap on it with police badge-like symbols on the top of his hat. There is a red glowing light on top of the hat imitating a police car's siren. Chip's eyes are azura-blue with darkish purple shine.

Chip on the Pets Menu.

Chip after being caught. 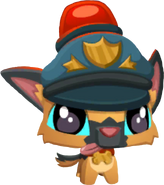