Boost Duration
Celeste is a

Celeste is a very pale light blue-white pony, with a light cyan mane and tail. She has a pink muzzle, shiny pink blush on her cheek, and pink ears one of which has a nick in it, which is her right ear. The pony sports golden hooves and a golden horn on her forehead, of which has a pale blue star under it from where it stems out. Celeste has large, girly blue eyes with long eyelashes and dark cyan shine.

Celeste on the Pets Menu.

Celeste after being caught. 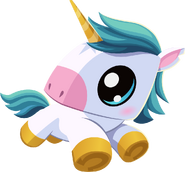