Beo is a pastel goth in need of some proper pastels.

Beo is red with two large areas on the sides of his head colored black, and very wide circle-like eyes with a dark blue shine and nose. Beo's body is red expect for the side of his head which are his ears and eyes, along with slightly darker red inner ears and black speckles on his snout. He has a black tail. Beo also wears a black spiked collar. His pink tongue sticks out of his mouth. 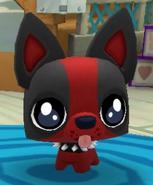 Beo on the Pets Menu.